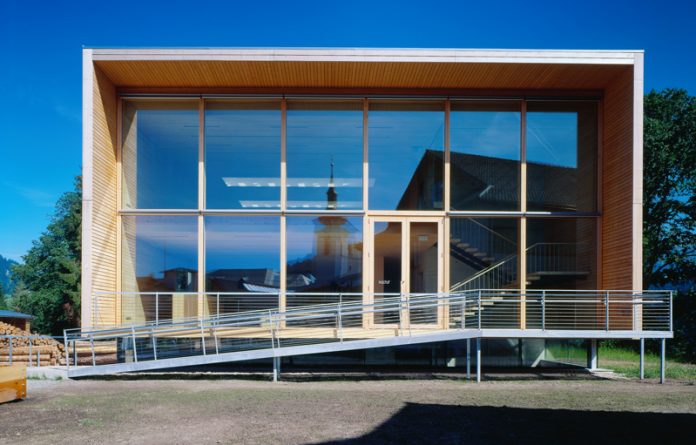 On one side of the building: the fire department. On the other: a women’s museum. The ambivalent (in the truest sense of the word) new building in Hittisau – a Vorarlberg municipality near the German border – will amaze you. Austria’s first women’s museum more accidentally than purposely arose next to a very traditional and traditionally male-dominated establishment such as a fire department. But even this situation mirrors something that’s very typical in Vorarlberg.

Here authentic traditions are met with a very modern view. The visual results of the astonishingly compatible blend of old and new are especially present in the architecture. Here the women’s museum in Hittisau offers an excellent example as well: a traditional timber construction connected with distinctive new moldings. And the contents?

“The women’s museum considers it to be its mission to display the world (past and present) from the view of women, the conflict women have with their natural and social environments, and the (women-specific) culture which has developed from this,” director Elisabeth Stöckler says. It is primarily about sharpening the awareness of today’s women through historic and social references regarding their own identity. In addition to scientific research and knowledge transfer projects, running projects and exhibitions are at the center of the museum’s range of activities. “The visitors will be able to have experiences with their own bodies at different stations, whether artistic, spontaneous, discreet or crazy: impulses for an unfamiliar experience and understanding will be sent out.” It doesn’t disappoint on exciting topics either. And the institution encourages a tendency which strengthens the perception of the feminine identity in public.

The well-known, internationally active photo, video, and light artist Sigrun Appelt can take an outside look at the situation in her homeland and confirm that the conditions – for female artists, for example – have changed: “It has essentially gotten much better in the last few years. Female artists find more acceptance as was the case in the early 90s.” Appelt herself was born in Bludenz, today she lives and works in Vienna. She is present in Vorarlberg – most recently with the light piece “160 kW” in Kunsthaus Bregenz – thanks to her collaboration with Zumtobel Lighting, one of the most successful companies with its headquarters in Vorarlberg.

If we can believe her homepage www.zeebeemusic.com, the musician, with catchy stage name zeebee, inhabits “the rockin mountains of austria”. She means, of course, Vorarlberg, which is where she lives. Even if she was already with the British band pig bag at 17 and first came out with her own formation d-sire with a Swiss record label. Today she works via the internet together with many different songwriters from all over the world. And she got a sound which contrasts with all that came before – something really different somewhere between pop, jazz, trip hop, dub, hip hop, trance, and folk. Her two youngest albums “chemistry” and “priorities” were released by the Austrian alternative label Angelika Köhlermann Records. Also not a bad address.

The music that Petra Stump-Linshalm makes, sounds totally different. Together with her “Gahl-Huang-Stump-Trio” (Annelie Gahl – violin, Hsin-Huei Huang – piano, Petra Stump-Linshalm – clarinet), the clarinetist is currently compiling new works from composers such as Jörg Widman, Rebecca Saunders, Klaus Lang, Beat Furrer, and more. After many years Stump-Linshalm is moving back to Vorarlberg to teach her instrument. She herself was trained at the Vorarlberg Landeskonservatorium before she left for Vienna and Amsterdam.

There are also open eyes and ears in Vorarlberg for great female artists of the past: thoroughly documented, the roots of Angelika Kauffmann, one of the greatest female painters of the 18th century, run clear across the province. Born in the Swiss town of Chur, she spent her younger years in the Vorarlberg Schwarzenberg. Here she was honored (among other things) with a specially built concert hall for the Festival Schubertiade.