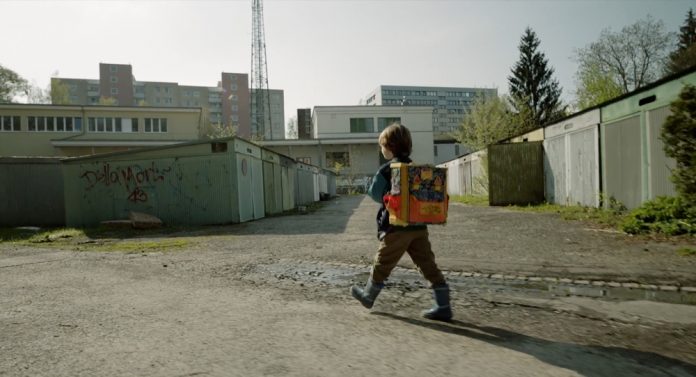 “It’s really intense, when a story both makes you laugh and cry.“

Watching Forrest Gump for the first time as a boy, it dawned on Adrian Goiginger that he wanted to be a filmmaker. At only 25 years old, Goiginger has now presented his debut feature film with sweeping success: His film The Best of all Worlds was invited to screen at the Berlinale and immediately won the Kompass-Perspektive-Preis – a price for the best up-and-coming filmmakers that was awarded for the first time this year. His film will premiere in Austria at this year’s Diagonale in Graz.

The film tells the story of Goiginger’s own childhood in Salzburg. It is the story of a child whose success story could not possibly have started right from the cradle. It is about Goiginger’s relationship with his mother, who is torn between her deep love and care for her son and her drug addiction. In a time, in which she manages to stay “clean“, his mother dies.

“As I began to think about my mum and my upbringing a great deal, it hit me that the story of my childhood is extreme. What was as striking to me was that one can have a beautiful childhood with a heavily drug addicted mother – a fact that must be unimaginable to most people,“ says Goiginger.

The Best of all Worlds was shot at the original locations in Salzburg and won the jury at the Berlinale over “with its delicately staged, outstanding ensemble. Never becoming corny or voyeuristic, it gets under one’s skin with its unpretentious image composition,“ says the jury in a statement.

A key for the film’s success was 7-year old Jeremy Miliker from Salzburg, who was cast as young Adrian. “We intended to show this milieu from a child’s perspective,“ says Goiginger. “Therefore, we set up the equipment in a way that would allow the camera to move around freely at 360 degrees at all times. After all, a child is always moving and might suddenly turn the head. This is when the camera has to move along. As for Jeremy, he certainly has this dispositive. And we wanted to open up the world for our ac-tors and not lock them into a rigid camera frame.“

Goiginger’s talent attracted attention from early on. At only 20 years of age, Land Salzburg awarded him a one-year grant in the film category. Back then, he had already created several short films as an autodidact. He is currently studying at the Filmakademie Baden-Württemberg. What he needed for turning The Best of all Worlds into his first feature film, was a risk-taking producer: “I can’t give enough credits to my producer Wolfgang Ritzberger for having that much faith in me at 24 years old,“ says Goiginger.